English as an additional language

Jamira, a girl aged 12 years 2 months, and Kopur, a boy aged 13 years 1 month, are both students for whom English is an additional language. Despite several years in school neither had acquired a particularly good standard of spoken English and their literacy skills were poor. The teachers are divided regarding the likely cause of their problems. Some believe that their difficulties were those of the typical student for whom English is an additional language, and that a greater amount of language stimulation was needed. Other teachers wondered whether Jamira and Kopur were perhaps not as bright as they had first imagined, and that consequently educational expectations were being set too high. Finally, some thought that there might be more serious underlying problems that were impeding these students’ progress. To help understand these cases, LASS was administered to both students and the results are shown in Figure 13 and Figure 14. 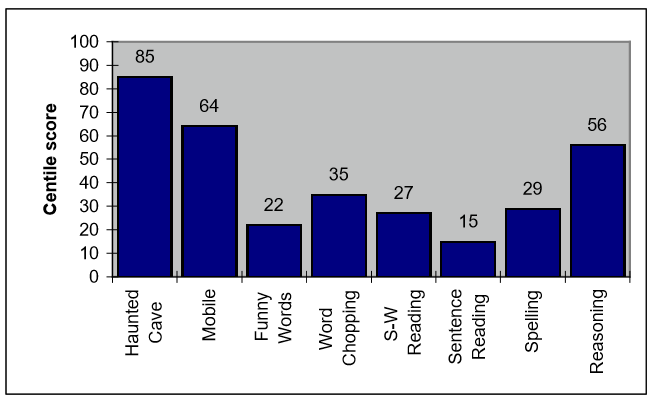 Of the two, Jamira is clearly the brighter (at least as far as non-verbal reasoning is concerned) and in neither case could low ability be taken to be the cause of their problems. But they differ markedly in their diagnostic test results. Jamira has good memory skills while Kopur has poor memory skills — in fact, his profile is that of dyslexia. Jamira, on the other hand, appears to be making some progress in reading and spelling, suggesting that the teaching methods that had been adopted were working, albeit rather more slowly that her teachers would have expected. 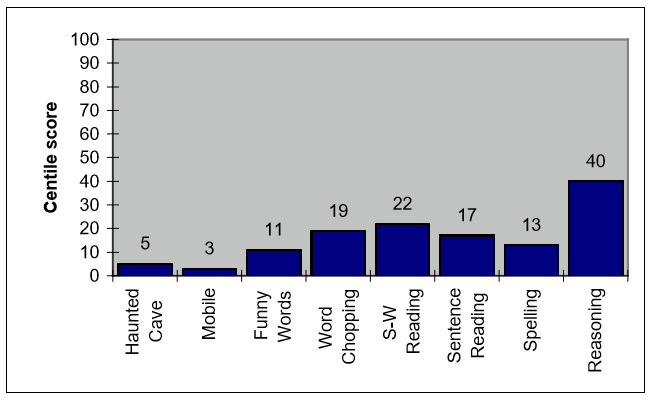 Both of these students require continuing support in English, but Kopur needs a more highly structured multisensory programme directed at his dyslexic difficulties (see Section 6.2.2), together with daily practice using a program such as Wordshark4. Jamira, on the other hand, should be able to cope with ordinary classroom literacy activities supplemented by some additional practice to help her increase her fluency.