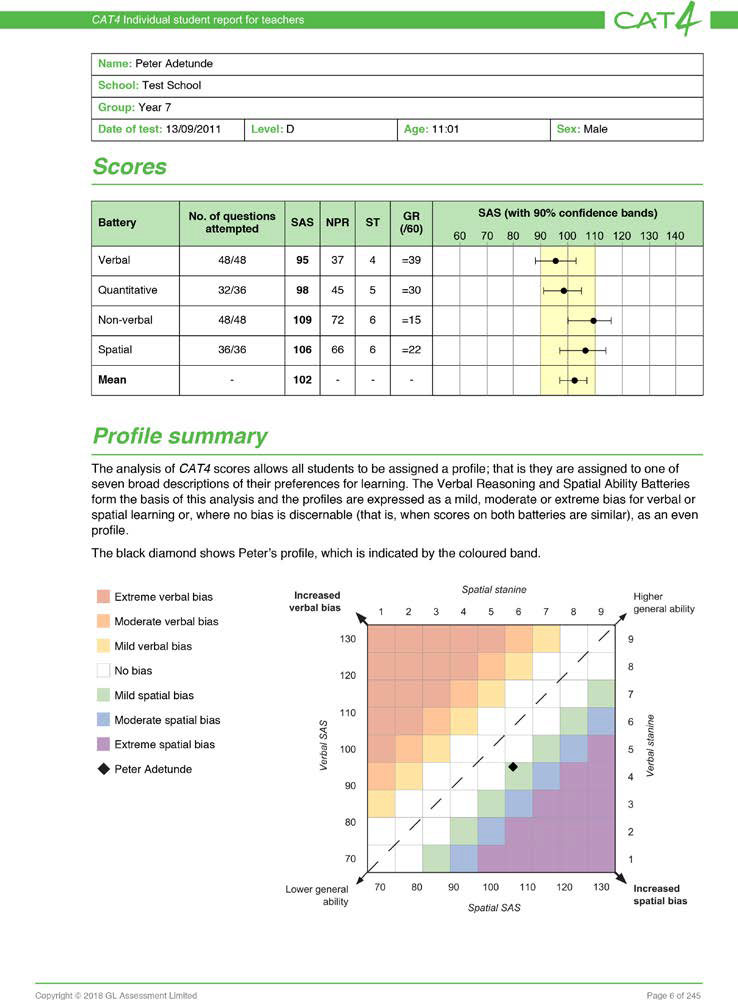 Peter Adetunde has a slight preference for spatial over verbal learning. His verbal reasoning score of 95 is in the low average range while his spatial ability score of 106 is in the high average range. Peter should be encouraged and helped to use his better spatial ability in subjects that depend on verbal skills. For example, Peter could use visual material to support text, create pictorial or diagrammatic representations of events in history and use mind maps to help remember key events and characters in a text in English.

With a verbal score of 95, Peter may not need the same kind of extensive language screening support as a student with a moderate spatial bias, such as Romana Kudayamage (see profile on page 81), but instead teachers should use his strong spatial and non-verbal skills to support those areas where his comprehension skills are lacking. For students with English as an additional language (EAL), the low score on the Verbal Reasoning Battery may indicate a lack of fluency with the English language.

It is also possible that the low verbal score might reflect social and economic disadvantages, such as little exposure to rich and varied language in the home or wider environment.

One key to Peter’s continuing achievement is likely to be the role played by effective collaboration with other students.

As well as addressing specific individual issues, there is also much that can be done to support reading development across the curriculum for all students, ensuring that they are able to make progress in their learning because they have the required reading skills. Examples of specific strategies are provided below. These will be covered under the guidance for moderate spatial bias – see Romana Kudayamage’s profile.

Examples of strategies for a mild spatial bias profile

The following strategies will support learners with a mild spatial bias profile.

The percentage of students aged 5-16 in England’s schools who are recorded as EAL has more than doubled from 7.6% in 1997 to 16.2% in 2013, and so identifying language learning needs is more important than ever, whether in a UK or international school context.

As noted, recording EAL in England often means a student has a low level of English language proficiency, or is from a home background where English language is not used. These students are likely to have lower achievement when starting school, but this effect “reduces markedly with age and is essentially eliminated by age 16” (Strand et al, 2015). In some measures of achievement in England, EAL students outperform their first-language-English peers.

Presuming that students in the UK make the expected journey through English language acquisition, scores across the batteries might be expected to improve. As noted already, students tend to receive a less extreme bias profile if they are tested two years later, and this is true both for EAL and first-language-English students.

This is not necessarily true for international schools that use English as the medium of instruction but which are located in a country that does not use the English language much outside of the school. Data from these contexts are sparse and often the school populations do not resemble the countries’ make-up of nationalities or socio-economic status. However, it is likely that students learning English in these contexts make less progress since there is less exposure to the language outside of school, so differences in achievement may persist to a greater extent, and differences in CAT4 scores persist also. Spatial bias is a more common profile in these conditions than in the UK, and this reflects the level of vocabulary required to score highly on the CAT4 Verbal Reasoning Battery.

Where a school has a special educational needs co-ordinator (SENCo) or someone with this responsibility, they should be able to determine the reading interventions required for specific support.

Low-scoring students may have been held back by a specific reading difficulty. Although dyslexia is not conceptualised as a problem with verbal reasoning, and indeed many researchers have found that dyslexia is equally common across the spectrum of abilities, it might be that very poor reading skills have affected a student’s performance on CAT4.

Dyslexia usually presents as a deficit of processing written words into their component sounds, which can take up the working memory, leading to worse outcomes whenever learning or reasoning involves written words.

It is important for teachers to check whether any spatial bias students have not answered all of the questions in the Verbal Battery, and, if not, then it might be that the teacher can identify whether readability or comprehension (or both) are issues. If the student is readily able to answer test questions when presented orally then the issue is clear, and the teacher may wish to administer CAT4 with adjusted conditions, particularly if it is likely that adjusted conditions will usually be allowed in the classroom and exam hall.

Along with GL Assessment’s diagnostic tools for identifying dyslexic tendencies, there is also the Dyslexia Guidance, which is specialised for students who are suspected of having specific learning difficulties with reading. The Dyslexia Guidance also includes resources to assist those students struggling with specific reading difficulties, whether formally diagnosed or not.

Previous: CAT4 and Strategies for Learning Next: Example of a moderate spatial bias profile